Since the 24th of May, Newrest has been operating all its usual Nightjet routes again. Night trains from Austria to Milan, Roma, Venice, Livorno, Zurich, Hamburg, Berlin, Düsseldorf, Bregenz, Brussels and Amsterdam are back on track with Newrest’s rail catering expertise. Newrest’s unit in Austria is responsible for the ÖBB Nightjet fleet. It’s in charge of rail activities such as train chefs, on-board catering, entertainment, reception services, logistics services, lounge services, security, laundry, and other services.

Since the 24th of May, Newrest’s train catering as well as the Austrian train activities have been back to normal. The latest nightjet destination has been launched at that date: it’s now possible for passengers to travel during the night from Vienna and Innsbruck to the Amsterdam Central station. Punctually at 10.43 a.m., the ÖBB-Nightjet 40490 arrived after a 14.5-hour journey from Vienna. It was the first train of the new night connection between the two metropolises. Collaborators and partners have been able to celebrate this launching with a small ceremony at Amsterdam Central station. Passengers in the sleeping cars and couchette cars receive a welcome drink and a breakfast before arrival. Guests are also able to choose from several dinner offers on board.

The inaugural trip should have taken place in December 2020, but it had to be postponed due to the pandemic. Before the pandemic, Newrest’s unit in Austria served over 1 million passengers per year. 200.000 travelers of those booked the first-class sleeping car, around 750.000 the couchette car. The night train journey can be spent in the seating area, in the couchette car with four compartments or in the sleeping car. The compartments can also be booked as a private compartment. This allows family, friends and acquaintances to travel together.

Newrest’s teams are excited by the launching of the next new destination from Vienna to Paris which will be efficient this upcoming December. The Group is actively preparing for the new night train and is ready to perform its services according to its high-rated standards which make its solid reputation worldwide.

A viral restart which knows a great success in Europe

Since the re-start of the Nightjets, the ÖBB has recorded increasing booking figures. In the last 2 weeks alone, almost 50,000 tickets were booked. The start of the connection to Amsterdam has been a great boost to bookings. This great success is linked to the mediatic impact of the restart: numerous Austrian as well as Dutch media reported around the premiere trip to the Dutch capital. The ÖBB achieved almost 20 million media contacts and reached 1.2 million people via social media. 400,000 hits on nightjet.com in the last two weeks are testimony of the European’s interest in travelling with the Nightjet. This trend continues and many customers are informing themselves about an upcoming trip.

Another prominent support on the test drive to Amsterdam has been received on the 8th of May 2021. Vincent Bueno, the Austrian participant for the Eurovision Sound Contest 2021 in the Netherlands accompanied Newrest and ORF teams to Amsterdam. This trip also gave the restart a lot of attention.

The ÖBB CEO Andreas Matthä and the Austrian Minister for infrastructure and Environment, Leonore Gewessler, were also on board during the maiden trip. Mrs. Gewessler is very convinced that the train is the future of short- and medium-haul travel in Europe. Using the night trains is a very climate-friendly travel option compared to a flight. For example, the Nightjet journey from Vienna to Amsterdam saves 100,000 kilograms of polluting CO2. It totally responds to Newrest’s commitment to reduce its greenhouse gas emissions by 10% by 2025, announced in the CSR charter of the Group.

Regarding the hygiene measures and the COVID 19 pandemic, teams disinfect trains before every trip and 3 times during it. Likewise, they hand out disinfectant wipes to passengers and inform them about disinfectant dispensers on board. Newrest adapts its hygiene measures to the respective country. For example, due to the legal situation in Italy, Newrest only provides packaged food on those routes.

Newrest teams are pleased to start-up its activity providing to the Group a well-known reputation around the world thanks to its expertise and unique service packaging. 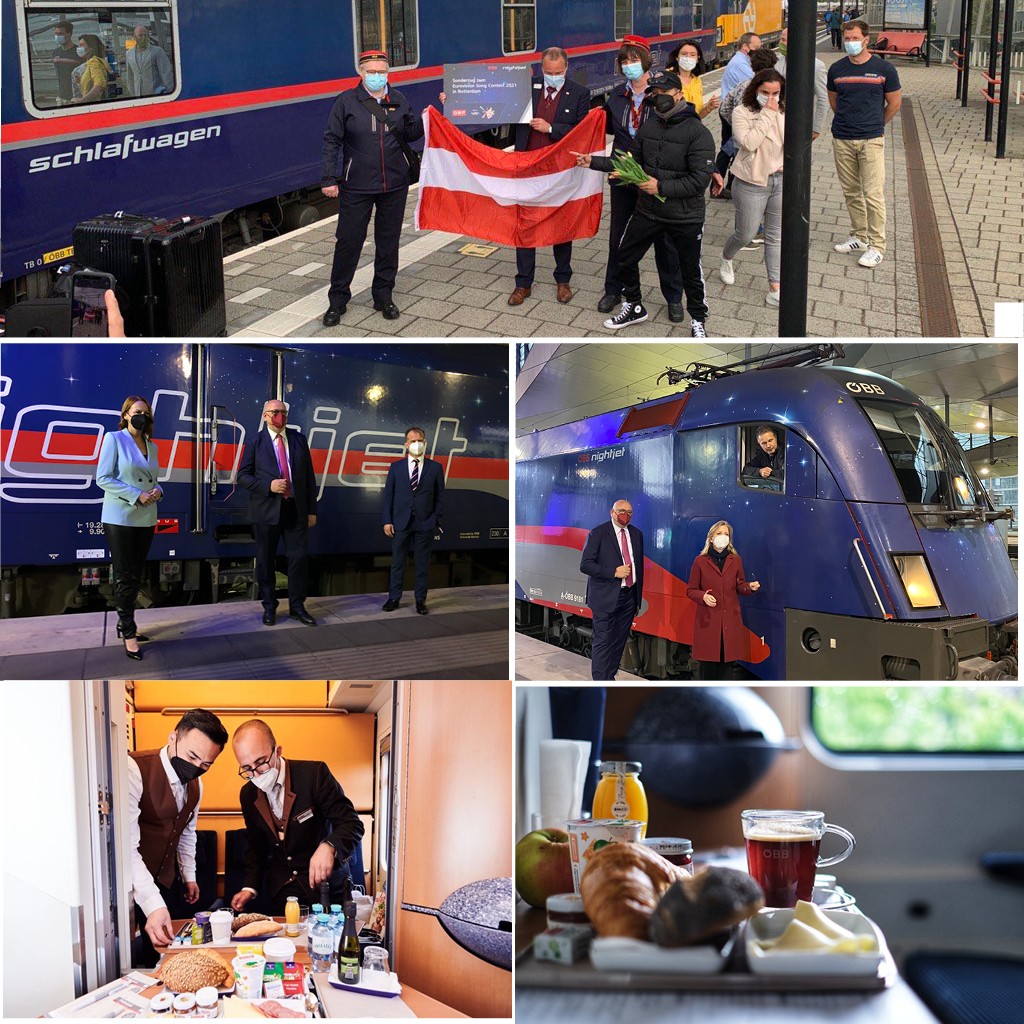